The range of impressive electric vehicles from German automotive giant Audi is growing, and the latest addition to this comes in the form of Audi Q4 e-tron leasing. This stunning all-electric SUV promises power, range, comfort and limitless style, and comes both in regular SUV styling and a Sportback version. The Q4 e-tron lease is Audi’s first compact electric SUV leasing solution and augments the range from the current e-tron and the e-tron GT.

The Audi Q4 e-tron has the unmistakable design signature of Audi’s ever-popular Q models. It’s more compact than the full-size Q5, but larger with more space and utility than the Q3 model. The Q4 e-tron lease comes in three powertrain specifications, the 35, 40 and 50. The Audi Q4 e-tron 35 comes with a 51.5kWh battery delivering 170PS power and a single-charge range of 208 miles. The 40 e-tron uses a 76.6kWh battery delivering 204PS power and 316 miles of range. Together, these cater to those with different range needs day to day.

The Q4 50 e-tron also has the 76.6kWh battery, but is also equipped with Audi’s much-lauded quattro AWD system that offers superlative on-road performance. You’ll feel glued to the road as you navigate the powerful Q4 e-tron lease through both city streets and country roads. Audi Q4 e-tron Sportback leasing will be available in both the 35 and 50 configurations.

When it comes to technology, you’ll struggle to beat the new Q4 e-tron. It’s jam-packed with Audi’s latest gear, including for the very first time an augmented-reality (AR) navigation system. Forget your navigation being limited to any kind of screen, this system actually appears to project your instructions onto the road itself, telling you for instance exactly which lane to be in, which motorway slip-road to take and much more.

Another first on the interior of the Audi Q4 e-tron is the optional SONOS premium sound system. Your playlist will never have sounded so good as when it’s played through these speakers. Standard interior technology also includes a 10.1” infotainment touchscreen, the latest version of Audi’s MMI navigation system, a fully digital instrument cluster and an all-new touch-sensitive sports steering wheel.

The interior of your Audi Q4 e-tron is more than just technology. There’s 520 litres of cargo space (535 litres in the Sportback version), too. On top of that, you get cutting-edge dashboard design, sumptuous leather seats and easy-to-use multi-zone climate controls. Finally, when your Audi Q4 e-tron is done for the day, you can plug it into charge for the next day. The 35 can accept up to 100kW DC fast charging, and the 40 and 50 can handle up to 125kW. That means you can go from 5 to 80 percent battery in as fast as 38 minutes.

Don’t miss out on the newest and greatest Audi electric car. Enquire today and learn about fantastic Audi Q4 e-tron leasing deals in your area. 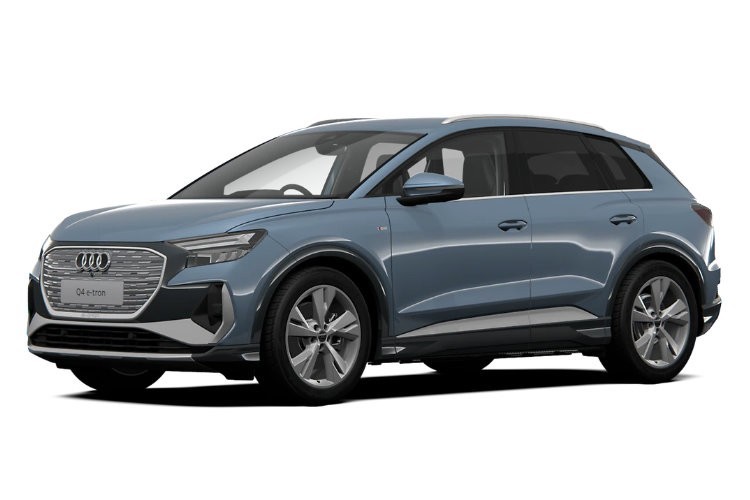